In a groundbreaking partnership with City College of San Francisco, SFMOMA hosts Diego Rivera’s monumental mural The Marriage of the Artistic Expression of the North and of the South on the Continent, more commonly known as Pan American Unity (June 28, 2021 – 2023) in the museum’s Roberts Family Gallery free space.

The mural, originally painted in front of a live audience at the 1940 Golden Gate International Exposition on San Francisco’s Treasure Island, is comprised of 10 fresco panels and measures 22 feet high and 74 feet wide (nearly 1,800 square feet).

After 80 years, Diego Rivera’s 1,600-square-foot fresco was unveiled and open to the public again! Technically it was open to the public before but not very accessible so it has been moved to another location which was quite a feat being that it is 20ft tall and 74 ft wide. 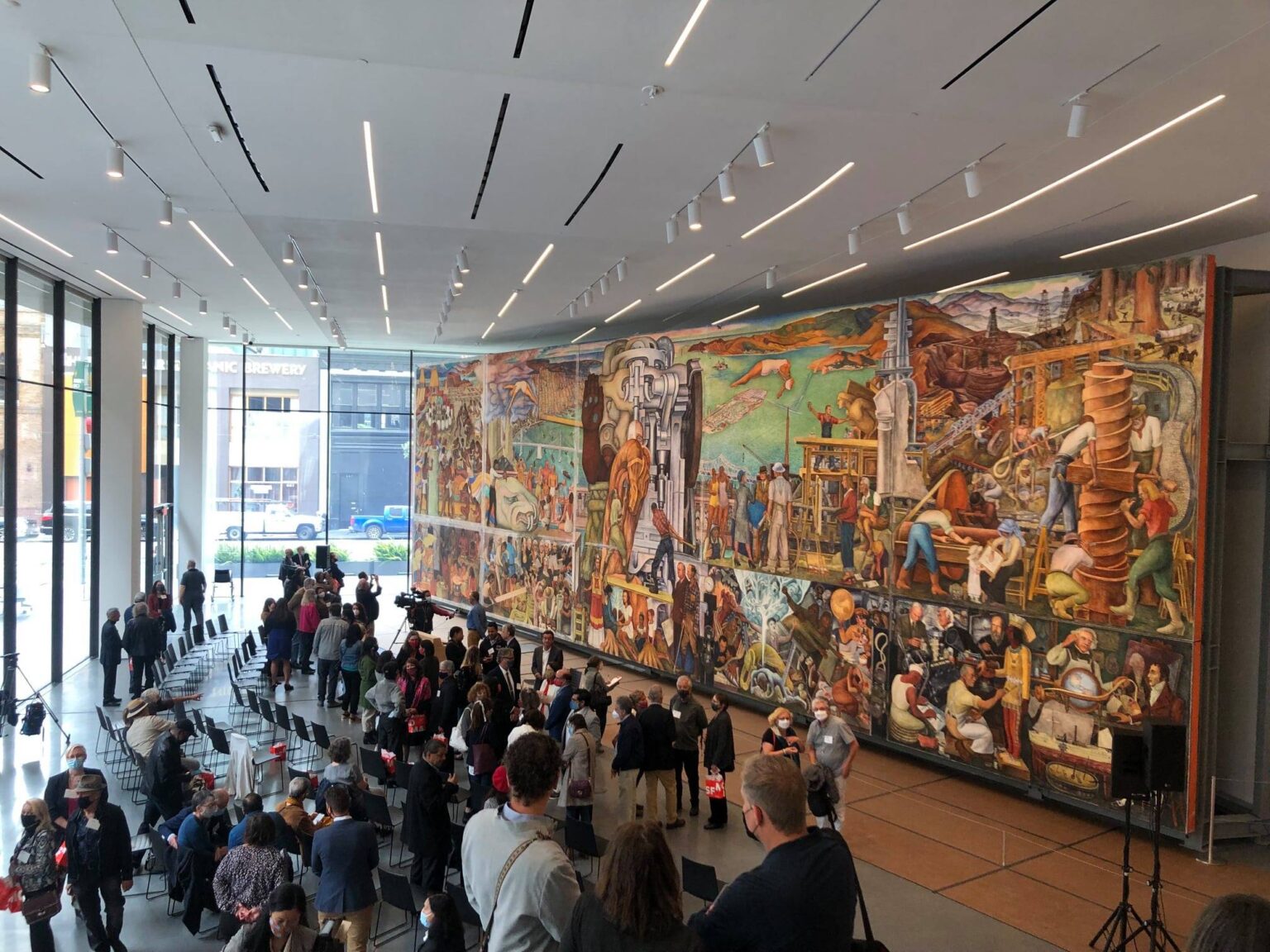 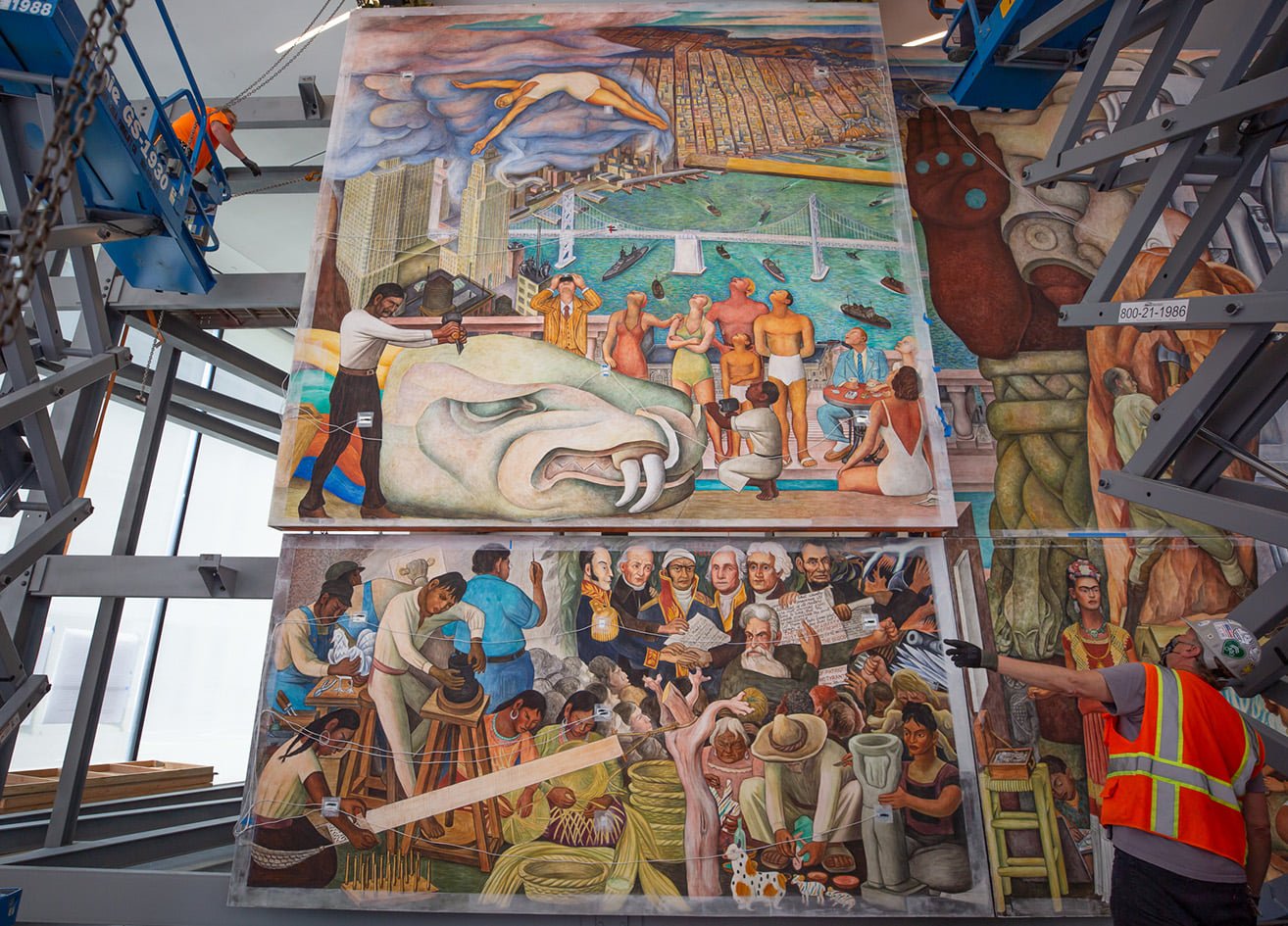 Diego Rivera’s rarely seen fresco will be on view for free at SFMOMA opening at 1pm on June 28th. It’ll be on view until 2023.

Ten years after his first stay,  Diego Rivera (1886–1957) returned to San Francisco in June 1940 to headline the main  fine arts exhibition of the  Golden  Gate International Exposition on Treasure Island. Working on a scaffold in an airplane hangar before a live audience, Rivera  painted  The Marriage of the Artistic Expression of the North and of the South on This Continent, commonly known as Pan American Unity, his last mural in the U.S.

The fresco depicts in colorful detail a past, present, and future that the artist believed were shared across North America, calling for cultural solidarity and exchange during a time of global conflict.  Completed with support from local artists and assistants, with scenes of the Bay Area as a backdrop, the mural celebrates the creative spirit through portraits of artists, artisans, architects, and inventors who use art and technology as tools to shape society.

After the fair,  Pan American Unity — measuring twenty-two by seventy-four feet and weighing over sixty thousand pounds — was moved to the campus of City College of San Francisco (CCSF). This was possible because Rivera painted this fresco not on a wall, but on ten steel-framed cement panels. More than half a century later,  an international team of experts  has spent years planning another move.

Where in the SFMOMA is the fresco?

In partnership with CCSF, SFMOMA presents Rivera’s  Pan American Unity  in the museum’s  free-to-the-public  Roberts Family Gallery on Floor 1. On view until 2023,  the mural will  then return to CCSF to be installed in a new performing arts center.

Tickets to the SFMOMA are not required to view the fresco. 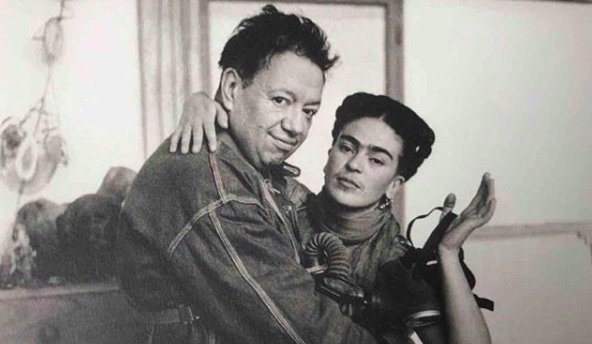