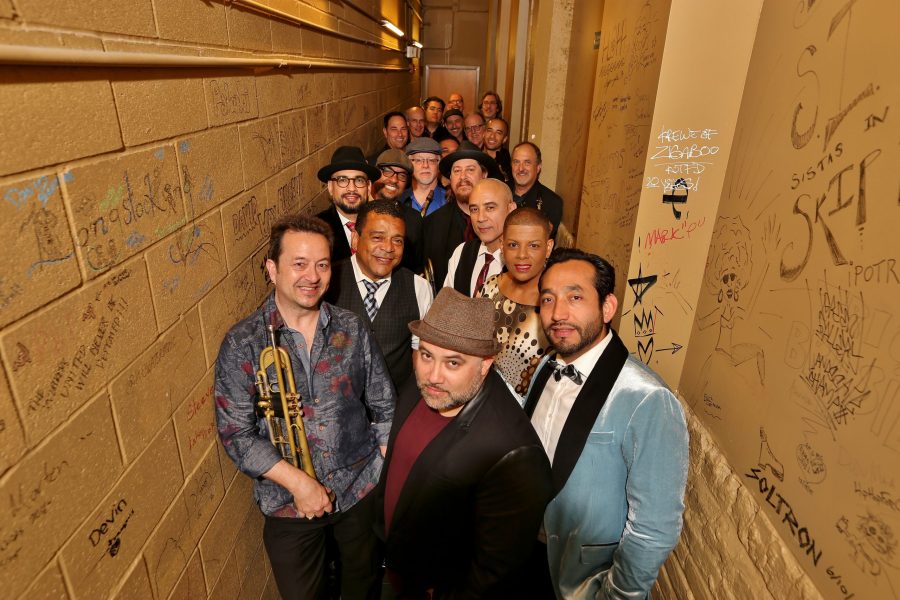 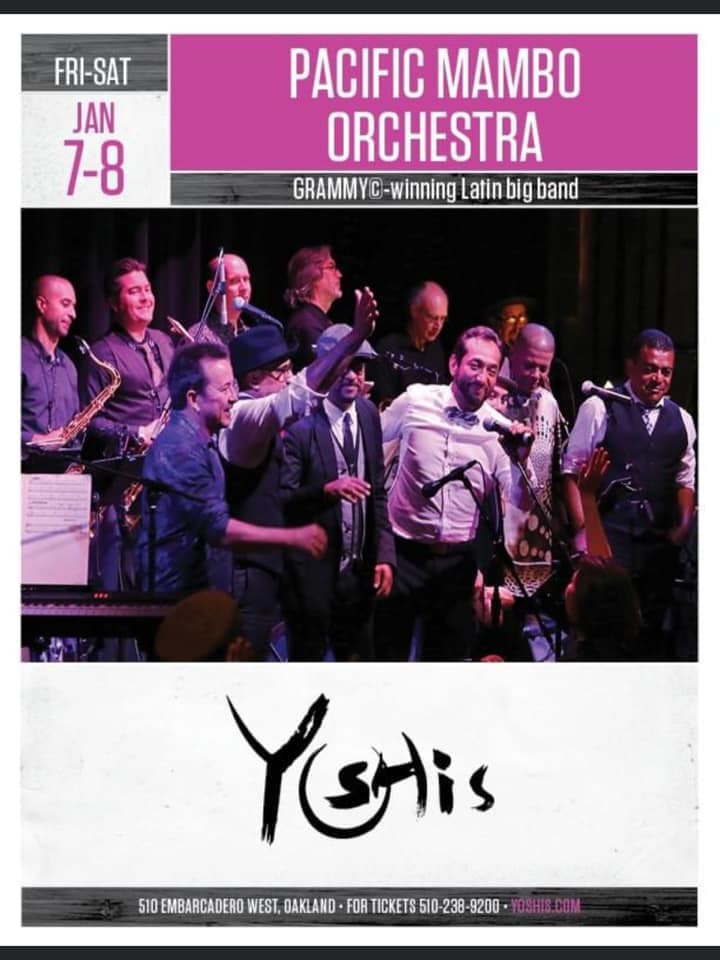 
Buy tickets here or at links below.

Pacific Mambo Orchestra is the 2014 Grammy® Winner for ‘Best Latin Tropical Album’ and is leading the rebirth of the Latin Big Band Sound.

Now in its 10th year, Pacific Mambo Orchestra’s new album ‘The III Side’ cements PMO’s claim to the legacy of Latin Big Band with a vengeance.

This is a perfect blend and example of how the Latin Big Band sound can appeal to young and new audiences alike in 2020.

Recognized as a global phenomenon, PMO effortlessly combines diverse genres such as Classical, Pop, Mambo, Timba, Cha Cha and Bolero into the now recognizable PMO sound, which is as danceable as it is appealing to the listener with its intelligent arrangements, superb musicianship and infectious energy!

PMO has performed nationally as well as internationally on the biggest stages and most prestigious Festivals in the world such as Monterey Jazz Festival, Stern Grove Festival, Montreux Jazz Festival, Mexico City’s 5th Annual Tribute to Salsa, Jacksonville Jazz Festival and many others.

Their 2014 Grammy® Award crowned PMO’s 2013 National Tour of Performing Art Centers (produced by Columbia Artist Music LLC) in the US and was received with great acclaim by fans and critics alike.

The PMO is directed by Mexican-born pianist Christian Tumalan and German-born trumpeter Steffen Kuehn, each one a highly skilled and experienced artist in their own right.

The orchestra is comprised of the Bay Area’s top talent. 2014 GRAMMY® Winner the Pacific Mambo Orchestra (a.k.a. the PMO) is a San Francisco based musical group leading the rebirth of the Latin Big band Sound. The PMO uses the traditions of the classic mambo-craze orchestras of the 1950s to deliver their original music and clever, modern arrangements of hit songs PMO honors the Latin Big Bands of the 1940s through the 1960s, including artists such as Machito, Tito Puente, and Tito Rodriguez, while infusing them with intoxicating new energy and cleverly written modern arrangements. Richly textured arrangements flow through the entire production, with exquisite playing by ace musicians.

Richly textured arrangements flow through the entire production, with exquisite playing by ace musicians. With a repertoire of mostly original scores, the selections move in a frenetic pace, pulsing with the sounds, rhythms and beats that only a true Big Band is capable of producing.

Their GRAMMY® award crowned the PMO’s first national tour of Performing Art Centers in the US. The tour featured Tito Puente Jr. and was received with great acclaim by fans and critics alike. Their musical numbers spanned many Latin genres — Salsa, Mambo, Latin Jazz, Cha Cha Cha — along with a fusion of sounds that incorporated more modern genres (R&B, Hip Hop). The show also pays tribute to the pioneers of the classic mambo orchestras, all while paving the way to a bold new sound designed to reach the next generation of Big Band listeners.

About the Pacific Mambo Orchestra’s GRAMMY® Award winning, self-titled debut album:
This sizzling debut may be attributed to the hard work, passion and determination of visionary bandleaders Tumalan and Kuehn, who founded the group three years ago with the aspiration of growing PMO into the most active Latin Big Band in the nation. Once they achieved their goal, they embarked on a six-month grassroots campaign to finance their first recording, seeking support from aficionados via local clubs and the internet. And the fans came through.

The resulting compilation is the first project of its kind to emerge from the San Francisco Latin scene and a unique, welcome contribution to the music world. Tumalan and Kuehn not only produced the album, but also performed, composed, and wrote the music and lyrics for many of the songs. One of their biggest accomplishments was gathering the impressive roster of international, award-winning talent that appears on the album. Together, band members and contributors bring forth decades of collective experience playing with a variety of musical greats, from Dizzy Gillespie, Carlos Santana, Herbie Hancock and Tito Puente, to Art Garfunkel, Blood Sweat and Tears, Jerry Garcia and Mariah Carey. The resulting tracks showcase fresh songwriting, inspired arrangements, clever improvisations, and superlative vocals.